Today, upon trying again, nobara installed properly on my Zephyrus G15. After tinkering with the install for half an hour, I gave up. Getting asusctl to work properly is simply too time-consuming and for a non-gamer, not worth it. The optimizations make software installs and removals awkward so the triumph is short lived.
Lastly, the external monitor does not get the 60HZ refresh rate. That was the last straw.

Nobara receives a lot of positive attention so I downloaded it to see how it would run on the Zephyrus G15. The install went fine and I was excited to reboot and see the NVIDIA drivers and asusctl automatically configured. It wasn’t meant to be.

I use Fedora Media Writer to create the Nobara USB stick to boot from and as always, that part was fine. Booting the installer proceeded as expected as did the install. Then came the magic moment where I reboot and experience Nobara in all its glory. Unfortunately, “NO bara” today. The boot process hung early on and all I saw was the ROG logo. Pressing the Esc key revealed an error message which was repeated countless times.

I am disappointed because I heard such great things about Nobara. Although I don’t play games, it would have been nice to see how Blender performed with all the additional tweaks. Then again, it’s OK because lately, I mostly use the laptop for Python and working on PHP-driven web sites. Still, firing up Unreal Engine 5 once in a while but the first excitement has worn off.

The main reason why I installed Nobara in the first place was simply based on the fact that Fedora needed to be reinstalled. This way, if something goes wrong, I wouldn’t mess up a perfectly good install. Unfortunately, something went wrong and since I never got to experience this supposedly “advanced” version of Fedora, I might give it a second chance. In a few days, Fedora 37 will surface and once the first reviews give it two thumbs up, I might just try to install Nobara again. If it works, I’ll update this post and if not, then my hard drive will gain 3.7 GIG of space.

Sorry to not have better news. If you have installed Nobara on a Zephyrus gaming laptop then please share your tweaks. It would be great to have asusctl automatically configured and test the performance while working on 3D assets.

I suppose that once in a while, it is good to see a Linux install fail. For it is then that I appreciate how amazingly well Fedora runs on the Zephyrus G15.

Just because my install failed doesn’t mean that yours will too. If you have a different model that meets the requirements then by any means, check out Nobara and download the latest ISO which was just posted a few days ago. The developer behind the project has a solid reputation and almost all of the reviews I found were positive. Thank you for your time.

# does not boot# Nobara zephyrus
Can you share this article? 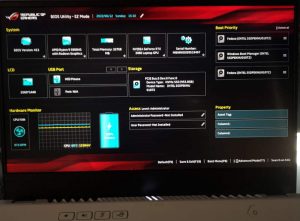 How to install Fedora on Zephyrus as the only operating system 5 reasons why Fedora is an awesome Linux distribution