The road to success is often built from steps of failures but those don’t matter once one succeeds. Today, October 21, 2022 I am installing openSUSE Tumbleweed once again. The reason for a new attempt is to try the OSB (Open Syse Buildserver) version of asusctl.

After failing twice, I decided to try one more time. As before, openSUSE Tumbleweed installed fine and the laptop booted without issues. Before I continue, I’d like to mention that I performed an encrypted install and completely deleted the previous operating system.

YAST allows for making changes before the install begins. I always do that because I don’t need most of the default apps that would otherwise get installed. The purpose of the laptop is software and game development. For software development, I mostly need PHP, Python, Mariadb and VSCodium.

For game development, I need Gimp, Material Maker, Blender and the Godot game engine. Therefore, I uncheck the office suite and many of the Gnome helper apps like Weather, Torrent and IRC and VNC stuff.

UPDATE! As of November 2, 2022 this is no longer the case. The NVIDIA repos are working again!

It saddens me to say but openSUSE used to be amazing. Installing the NVIDIA repositories consisted of a few mouse clicks and it was done. For some reasons, the community repositories no longer populate which means that I had to add the NVIDIA one via the terminal.
Here is what I use instead:

After that, I loaded the YAST Software Management Module and installed the NVIDIA drivers for the RTX 3080 GFX card. Then I rebooted and was pleased to see that the system came up normally which meant that the graphics card drivers installed without issues. So far, so good.

The last step and most important step was installing asusctl

Without asusctl, the install is pointless. The laptop will run OK but far from optimal. Thanks to the creator of asusctl, we get a much improved battery live and fan (cooling) curves that keep the laptop at ideal temperatures. Speaking of battery life, it is best to limit the charge to 80% capacity. Here is how to do that:

Open the Gnome terminal and type:
sudo nano /etc/asusd/asusd.conf
Then change the number 100 to 80 or 60 and exit Nano. Just in case you are new to the Nano editor, saving and quitting involves pressing the keys as listed.

After a final reboot, I was happy with the install and proceeded to implement my usual Gnome tweaks like installing Dash to Panel, asusctl (Gnome extenion) and Alphabetical Grid. These days, I keep the Gnome extensions to a minimum.

Other than that, I have a fully functioning openSUSE Tumbleweed install which runs better than expected on the Zephyrus G15 gaming laptop. I use an external ultrawide monitor which is connected via a USB C to DP cable and that too works fine. I will update if something unexpected comes up and if it does, I will revert back to Fedora for good. With Fedora 37 just around the corner, there is not much room for error but if this latest install proves to be robust then I’ll stay with openSUSE.

And here is the original post which had failed.

September 17, 2022
Today was not openSUSE’s day. Although the install went OK, the asusctl Gnome extensions did not install and since time was of essence, I chose to abandon the install and revert back to Fedora. As always, Fedora 36 is a breeze to install and took maybe 10 minutes to complete.

Before installing, I quickly verify the ISO file by opening a terminal in the Download directory. To get the sha256sum string, I issue this command in the terminal:
sha256sum openSUSE-Tumbleweed-NET-x86_64-Snapshot20220917-Media.iso

Here is a screenshot of the terminal displaying the command and then the output of the checksum.

Please note that the checksum changes when ever openSUSE releases a new installer ISO. The process of verifying the ISO does not change.

With the checksum visible, I compare the terminal output with the downloaded file. Since it matches, I proceed with preparing the USB stick which I will use to boot the installer.

If you use Windows, then I recommend Rufus (rufus.ie) and if you use Fedora, then just use launch Media Writer, insert an empty (or one with non-important data) USB 3 flash drive and finally, select the downloaded ISO. Click the Write button start the procedure.

With the USB flash drive inserted, I press the power button and then hold down the ESC key. This will temporarily halt the boot process and let me select to boot off of the USB flash drive. I do that by using the up/down arrow keys to select the USB drive and press enter to continue.

Now the boot process begins and once the probing of the existing hardware has been completed, the install windows opens.

The END of the road

The basic install went fine and before I continue, I’d like to state that I have installed openSUSE Tumbleweed many times before.

The first issue arose when I tried to install the NVIDIA drivers. I have done this many times before but today, the repository did not populate and so I used the terminal to add it. Then I did install the drivers and they installed normally.

The trouble began when I installed asusctl which was recently changed. Now, a second Gnome extension is required and for some reason, that one did not activate. First I logged out/in to see if it would fix the issue but it didn’t. Neither did a reboot.

The reason why I gave up early is based on the fact that the laptop started to run hot. Now I am reinstalling Fedora Workstation 36 from a recently updated ISO

I have to be quick because I don’t want the battery to charge fully. I’ll update if something unexpected pops up. If not, then …. se you next time.

Until someone successfully installs openSUSE Tumbleweed I’d say stay with Fedora. There is always the option of running openSUSE in a virtual machine if needed. 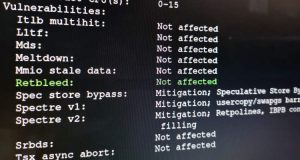